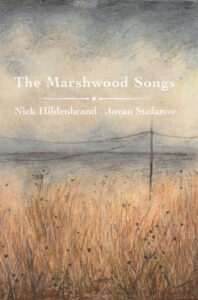 We are pleased to announce that Nick Hildenbrand and Jovan Stefanov, the recipients of WEA’s Literary Arts Infrastructure Grant in 2020, recently had their book of poetry The Marshwood Songs published by Windsor’s Black Moss Press.

Nick Hildenbrand incorporates observations influenced by his deep family roots in LaSalle and Jovan Stefanov, a Macedonian-Canadian, incorporates motifs from his family’s heritage into the collection. The poetry in The Marshwood Songs is complemented by illustrations from local artists Emily Conlon and Hrista Stefanova.

The book will officially be released at the end of March however you can purchase advanced copies online at Black Moss Press, or in person at Biblioasis or Indigo.

Nick and Jovan will be reading selected poems at the upcoming BOOKFEST SPRING EQUINOX event on April 22th at the gazebo at Lanspeary Park (1250 Langlois Ave) from 6:30 – 8:30pm.

Come to the event and bring your copy of The Marshwood Songs for the guys to sign!